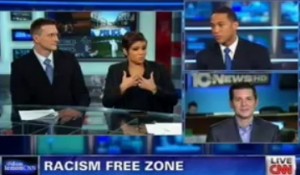 Things got a little wild and crazy on the set of Don Lemon‘s special “Color of Crime” edition of CNN Newsroom Saturday night, in a panel discussion that featured enough n-words to partially fill the intro of a Wu Tang Clan record. Cable news regular Goldie Taylor mixed it up with comedian Dean Obeidallah and diversity expert Buck Davis in the show’s own version of The Daily Show‘s “Racist Time Out,” and the result was some fun discomfort for all.

Lemon played that Daily Show clip, then encouraged his panel to enter his own “Racism Free Zone.”

Obeidallah, an Arab-American comic, joked “If you call me a terrorist or a camel jockey, I’ll never forgive you.”

Things got a little interesting when Obeidallah opined that “I can say anything about white people because you can’t offend white people,” but “if you call me a sand n, there’s a stigma to that, I’m going to be upset with you.”

Lemon expressed his discomfort with saying “the camel thing,” but said “as a black person, I can say nigger. I can say that word. But someone else says that word, it’s like, ‘Wow, you can’t do that.'”

Goldie disagreed with Obeidallah about white slurs. “I can’t say honkie or cracker or any of those other things,” she said, “but I have white friends who can say them and use them in jest or use them, I can say some other words that I choose not to, maybe on air.”

I can’t speak for all white people, but I agree with Dean Obeidallah, really effective epithets for white people haven’t really been developed yet. I’ve heard “honkie (or honky),” “cracker,” “ghost,” “gray-meat,” none of which carry anything near the sting of other racial and ethnic slurs. Probably the worst epithet for white people, “white trash,” the idea being that the default for whites is non-trash, is, itself, a backhanded swipe at black people.

But it’s not the words themselves that are lacking. Asked if he would be offended if Obeidallah called him a “cracker,” Buck Davis replied “Not at all. Because I’ve not had decades of oppression tossed in my face with it, as a white person.”

Lemon added that, in the context of a news story, he hates euphemisms like “the n-word,” saying  “I don’t care what color the reporter is, I think someone should say ‘that person called him a nigger,’ rather than ‘the n-word,’ because it sanitizes it.”

Davis then added (facetiously, I think) “I think you confuse white people, because if you’re saying if you can use it, why can’t we use it?”

“White people aren’t confused by the word nigger,” Goldie responded, with a laugh. “When they say it towards someone else who is black, they mean it, generally speaking, in a derogatory fashion.”

There actually are two kinds of confusion, real and feigned, among some white people about why black people “get to say” it and they don’t. A few years back, lots of white folks thought they had been granted an exemption by the Chris Rock “I hate niggers” routine, which also goes hand-in-hand with the ill-advised “hood pass” clause, but no, no matter how “down” you are, the use of the “n-word” by white folks will never be acceptable (no, not even if you’re all singing along to an N.W.A. song). You can say it, but you can also eat day-old sushi. I just wouldn’t advise it.

Then, there are some white people who are just offended by the “double standard,” as they see it, that Davis identifies. Setting aside the question of why these folks so badly want to be able to freely use the word (and again, nothing’s stopping them), the explanation is really quite simple. There are lots of “double standards” like this that no one has a problem with. I call my girlfriend “Sweetie,” and I call my best friend “Doosh (or sometimes, “Doucheface”),” but if someone else used either of those names on them, the result would be unpleasant.

As Goldie said, these are the people who aren’t confused at all, and this angst is just an extension of their resentment at being asked to make any concession to race, whatsoever. A friend of mine told me, last week, that he explained it to one such resentful white friend this way. “You get white privilege, you don’t have to worry about being discriminated against for jobs, or being followed around in a store, or getting shot when you get pulled over,” he explained. “This one thing is ‘black privilege.’ That’s not a bad trade.”

The use of the n-word as a familiar greeting doesn’t isn’t even greeted with unanimous acceptance by black people. I spoke to Goldie this morning, and she said “That word is never a term of endearment,” and disputed the notion of “reclaiming” the word. “It’s like reclaiming a burning house,” she said.”

The earlier part of last night’s show was devoted to some heavy topics, including the story of a black off-duty cop who was shot 28 times when he was pulled over for a traffic violation, and lived to tell about it. Police said Howard Morgan fired at them when they tried to arrest him, he says the police attacked him, and a jury sentenced him to 40 years in 2005.

But Goldie also talked about how crime has impacted her own life, specifically, the unsolved murders of her father and brothers in three separate incidents, at the hands o f black men, according to witnesses. Along with the broader black experience, those incidents affect how she views the word. “The last words my father heard were ‘Die, nigger, and die quick,” she says.

That’s a key difference between the word “nigger,” and other epithets. It’s not just a “bad” word, a mean thing to say, and it’s not just a symbol of violence and oppression, it is actually an instrument of them, first as a conditioning tool, and later as a means of terror. Goldie argues that the word cannot be deprived of its power, and in my view, it shouldn’t.

Goldie also told me she expects to get some grief over the segment. “Some people will object to the use of that word in any context,” she says, but she agrees with Lemon that the word shouldn’t be sanitized from news stories. She and Lemon have already taken a fair amount of criticism for the discussions of race that have been spurred by the Trayvon Martin story, and she tells me she continues to have the n-word thrown at her online, but even seemingly unproductive conversations about race can yield value. If nothing else, such conversations are consistently revealing.