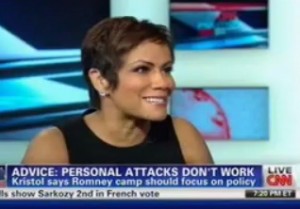 During an appearance on Don Lemon‘s CNN Newsroom Sunday night, cable news commentator and social critic Goldie Taylor blasted The Daily Caller for digging up the nugget that President Obama ate dog meat as a 6 year-old, and putting it on their “no-name” website.

In comments to Mediaite after the appearance, she went on to rip Daily Caller founder Tucker Carlson, accusing him of “using race to drive traffic,” all to “underwrite his collection of school boy bow ties.”

On CNN Newsroom, host Don Lemon said “We’ve all seen the GOP campaign get petty with this ‘Dog-gate. I can’t believe we’ve become fascinated by this, and they’ve done so much reporting.”

Taylor observed that “if all you have is the eating proclivities of Indonesians in 1967, you’re in an awful lot of trouble. This is ground that Mitt Romney has got to stay out of.”

“I think it came up first on The Daily Caller,” she continued. “Tucker Carlson put it out over the last couple days, it was something rehashed out of the President’s autobiography, back in the ’90s that somebody decided to go back and read the book, pull it out, and stick it on a no-name website. So here we are talking about what the president may or may not have tasted in 1967.”

Conservatives see “Dog-gate” as a convenient antidote to Romney’s own numerous canine missteps, but while it surely does please the hooting masses who already hate the President, average Americans aren’t likely to see this as a push. Dogs are a net loser for Romney.


In comments to Mediaite following that appearance, Goldie said “They’re no better than Newsbusters,really,” referring to the conservative media watchdog whose editor recently warned of an impending race war on Lemon’s show. “Using race to drive traffic.”

Goldie went on to tell me that “After being chased from the airwaves, including CNN, MSNBC and even PBS, Carlson is now fighting for relevance, opting to bathe himself in the filth and bigotry of fringe right-wing propaganda in a quest for page views. Carlson decided that being a dog wasn’t quite enough. It’s clear he’s enamored with the glory of fleas. It’s a curious business model, really. Bait extremists, then sell them to advertisers as “highly educated, affluent audiences” to underwrite his collection of school boy bow ties.”

In fairness to Carlson, his creation isn’t a “no-name website,” and that’s the problem. The Daily Caller is among a handful of conservative sites that have demonstrably exploited the Trayvon Martin story to stoke fear and resentment of black leaders, and of President Obama. One particular example of this coverage shows consciousness of guilt on The DC’s part.

When President Obama offered words of comfort to Trayvon Martin’s family and supporters last month, The Daily Caller announced that tiny, poorly-funded fringe group The New Black Panthers had bent him to their will with the headline Obama comments on Trayvon Martin case after Black Panthers, Sharpton ralliers bemoan WH silence. After we called them out on this, they changed their headline to the current, still-petty “Obama offers belated comments on Trayvon Martin’s death.”

Websites like Carlson‘s have influence, and when they use that influence to foment racial resentment and division, when they pervert a community’s pleas for justice into something akin to a race war, they do real damage, to their readers, and to decent conservatives who might otherwise see things another way. The Daily Caller was founded with the promise of a fair news site with a point of view, best exemplified by the likes of Matt Lewis and former DC-er Jon Ward, but it has sunk into a repository for funky red meat (canine or otherwise) and pointless viciousness.