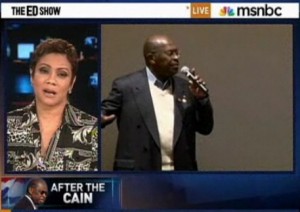 TheGrio.com editor and cable news rising star Goldie Taylor punctuated the Herman Cain saga with her own exclamation point on last night’s The Ed Show, comparing the departed former GOP frontrunner to a faith-healing charlatan, and declaring that “You have to be angry at a guy who’s running for president and bastardizes our political process for his own gain.”

Ms. Taylor made a raft of dead-on observations about Cain, but it was her shot at Newt Gingrich that really resonated.

Host Ed Schultz began by asking Taylor if Cain’s endorsement might actually hurt its recipient. She responded in very practical terms, explaining that a Cain endorsement “helps nobody.”

She compared Cain and current frontrunner Newt Gingrich to “the tent preacher who used to come to my town…when I was a kid and rub oil on people’s head and say they were healed.”

Taylor then cut through all the gaffes, scandals, and horse-race drama of this campaign to express the true, under-reported problem with these candidates: their bad ideas. “You gotta be sick and damn tired of people who want to cut Pell Grants, childhood basic education, Head Start, and programs that really break the cycle of poverty, and then turn around and say they want to put kids to work on the factory floor.”

Schultz also asked if a Cain endorsement would hurt a candidate in the eyes of women voters. Ms. Taylor didn’t think so, telling Schultz, “The guy who’s taken the front-runner position in the race, Newt Gingrich, he’s got his own checkered past when it comes to women and marriages. So I’m not sure if this Republican base really cares about how people handle themselves morally in their personal lives.”

While I agree with much of what Goldie Taylor said, I would only point out that accusing Herman Cain of bastardizing our politics is kinda like accusing Ron Jeremy of dumbing down pornography. The bar was pretty damn low already, and many political observers ironically credit much of that to Cain successor Newt Gingrich.