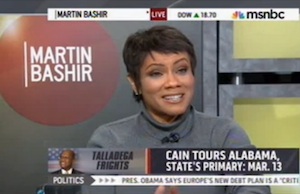 Earlier in the program, Taylor said she didn’t even believe Cain was actually running for president, noting he was visiting irrelevant states, and merely was in the race to sell books. “He has no organization. No staff there (in the early states) and no way to turn out voters for caucuses. Those are kinds of things that are just patently missing and he shows up in Tennessee and then Alabama says something about Herman Cain,” Taylor observed. “Either he has an incompetent national staff or he ain’t running. I think it’s the latter.”

RELATED: TheGrio Columnist On MSNBC: If Herman Cain Could Become The ‘Color Of Water’ He Would Do It

Democratic strategist Karen Finney agreed with Taylor that Cain wasn’t serious about getting the Republican nomination. “I think Herman Cain might be coming out with a new show because he’s become the new Donald Trump in the race and it’s hard to take him seriously,” Finney assessed, though she did surmise it might be because he’s raising money. “I think he makes that white Republican base of the party feel okay, feel that they’re not racist because they can like this guy, I think they like him because he’s a black man who knows his place.”

Watch Taylor and Finney slam Cain below via MSNBC: