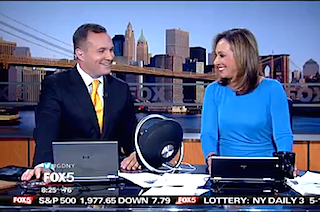 This morning, Good Day New York decided to play a few rounds of “Name That Tune.” What could possibly have gone wrong?

It was the song choice that did them in: DMX’s 1999 jam “Party Up.” Everything was going fine until the uncensored version of the song reached the line, “All your mens up in the jail before, suck my dick.” At that point, the audio quickly cut out as hosts Greg Kelly and Rosanna Scotto attempted to bring their morning show back on track.

They were just lucky the station cut it off before the song reached this lyric two lines later: “How the fuck you gonna cross the dog with some bum shit?”

“Alright, let’s turn that off,” Kelly said, before throwing to the next segment about cell phones vs. landlines from Fox Business Network. But they were barely able to make it through 60 seconds of that story before deciding a commercial was in order.

When reporter Lauren Simonetti asked the hosts if they had cell phones or landlines, Kelly said they have other things to “worry about right now” and would have to get back to her.

“Yes, I have a landline and a cell phone and I’m sure I’ll be on it all day,” Scotto said. “I’m sure the phone will be ringing off the hook today,”

“Finally you, not me,” Kelly said, possibly in reference to the creepy ogling of a bikini-clad correspondent that got him in trouble last week.

Watch video below, via WNYW-TV: