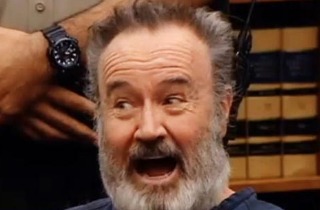 Charlie Brown isn’t such a good man after all. Peter Robbins, who voiced the main character of the Peanuts TV specials, went on a bizarre rant in court where he blasted the prosecutor and public defender before wishing death on the judge

Robbins’ troubled past has given way to “blockhead”-like behavior once before. He was sentenced in 2013 to a year in prison and drug rehabilitation for stalking and making criminal threats. His most recent arrest was due to a series of parole violations: cutting off his GPS bracelet, drinking alcohol, and failing to complete a class on domestic violence.

As Judge Robert O’Neil was handing down his sentence on Friday, the former star interjected several times, “firing” his attorney and asking the judge if he “even had a conscience.” Robbins then went back on his previous guilty plea, saying with increasingly harsh and foul language that he never committed any crime. “She has to believe I would kill her,” said Robbins in reference to his ex-girlfriend. “I wouldn’t kill her. I have never had any violent behavior!”

After the judge denied his request for a new trial, Robbins said “Good luck to you, I hope you drop dead of a heart attack.” When a guard tried to lead Robbins out, he cried “He’s rubbing me up, he’s got a gun! Run for your lives, he’s got a gun!”

Not surprisingly, his sentencing was delayed after O’Neil ordered Robbins to undergo a mental examination.

You can watch Robbin’s tirade here, via TMZ: