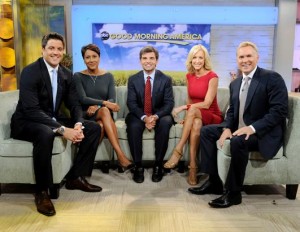 As Stelter notes, the victory has been one a long time in the making:

“GMA” has been gaining ground on “Today” for nearly a year, for reasons that are debated by the networks. (Format changes? New co-hosts? A boost from ABC’s prime-time schedule?) The newly reformatted morning show on CBS, “CBS This Morning,” is a distant third, with about half as many viewers as “Today.”

The victory should be a powerful morale boost for the GMA team, as the show has been nipping at Today‘s heels with former Today co-host Katie Couric‘s recent guest appearance alongside anchor George Stephanopoulos.

“It wasn’t just a coincidence,” Palin later told Fox News’ Sean Hannity. “I’m not sure how it all came together, but I am one for good competition.”