Dave Brat on Min. Wage: "Don't Have Well-Crafted Response on That'
VIDEO

GOP Candidate Brat on Min. Wage: ‘I Don’t Have a Well-Crafted Response on That’ 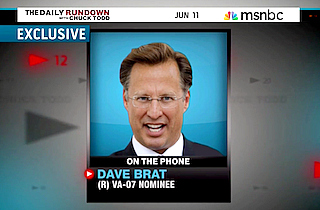 Dave Brat, chair of the Economics Department at Randolph-Macon College and the challenger who just unseated House Majority Leader Eric Cantor in a stunning primary upset, appeared on MSNBC’s The Daily Rundown and appeared caught off guard when host Chuck Todd asked him a handful of policy questions about the minimum wage, arming Syrian rebels, and more.

When Todd pressed him on whether there should be a minimum wage at all, Brat said, “I don’t have a well-crafted response on that one. All I know is if you take the long run graph over two hundred years of wage rate, it cannot differ from your nation’s productivity, right? So you can’t make up wage rates. I would love for everyone in sub-Saharan Africa, for example, children of god, to make $100 an hour. I would love to just assert that that owuld be the case. But you can’t assert that unless you raise the productivity.”

“I’m just making the case I just made,” Brat replied.

“Hey, Chuck, I thought we were just going to chat today about the celebratory aspect,” Brat replied. “My mind today is just…I love all the policy questions. I’m happy to do them more. But I just wanted to thank everybody for the victory.”

“So no answer?” Todd said. “On national security, do you consider yourself an interventionist or an isolationist?”

“I think the press is in the habit of doing juxtapositions like that that don’t capture reality well,” Brat said. “I’m a PhD in economics, so you analyze every situation uniquely, because every international situation is unique. So I don’t have a pattern that fits every incidence. But I think it’s absolutely necessary that the U.S. does project its power abroad.”

“I know you’re coach of your debate team at Randolph-Macon, or have been,” Todd concluded. “So I figured you wouldn’t mind a few extra policy questions.”