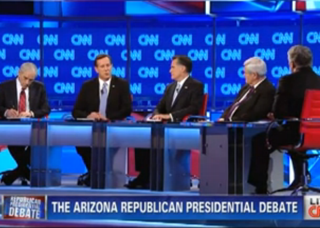 The inevitable round of questions on contraception finally arrived about halfway through tonight’s Republican debate, with each candidate giving a passionate response to the question of whether the government should or should not fund birth control. Newt Gingrich accused President Obama of “legalizing infanticide;” Rick Santorum decried American culture as having a problem with “children having children.” Rep. Ron Paul advised Republicans to keep in mind that birth control itself isn’t to blame for immorality, and Gingrich later took a page from Rep. Paul’s book and warned of the “tyranny” that could come from government regulated health care.

RELATED: Ron Paul Slaps Down Santorum’s Defense After Being Called A Fake As A ‘Cop Out’

Romney took a strong conservative stance against President Obama directly for “legalizing infanticide,” which he defined as “killing babies who survived abortion.” He did not speak as much on the matter as Santorum, however, as his comments on the matter took more precedent in the news cycle this week than most other candidates’. He blamed the phenomenon of young women getting pregnant for much of the culture, arguing that the best thing for a child is being born to a stable family, and that there was a serious problem in America with this issue. “But here’s the difference between me and the left,” he added, “just because I’m talking about it doesn’t mean I want a government program to fix it.”

Rep. Paul agreed with most of Santorum’s comments, adding that the problem was the government’s intrusion in health care, something that, as an obstetrician, he knew a thing or two about. He did not agree with Santorum’s previous comments that birth control promotes immorality, however. “The immorality creates the problem of wanting to use the pill– don’t blame the pill!” He compared this to gun control, adding “guns don’t kill, criminals kill.” Gingrich echoed Rep. Paul’s sentiments on government health care, and attacked Romney for his health care plan. “When you have government as the central provider of services, you inevitably move towards tyranny because the government has the power of force.”