Rep. Gohmert Shouts At Janet Napolitano, Insists ‘You See Me Hugging Muslims Around The World’ 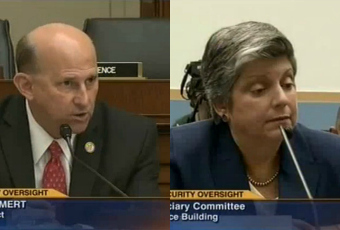 Rep. Louie Gohmert (R-TX), one of the five Republicans behind the controversial letter accusing Clinton aide Huma Abedin of ties to the Muslim Brotherhood, insisted Thursday morning to Homeland Security Secretary Janet Napolitano that he doesn’t accuse anyone of anti-American behavior simply because they are Muslim.

“You follow me around the world, you see me hugging Muslims around the world, because the ones I hug are our friends,” Gohmert told Napolitano during a House Judiciary Committee hearing. “This administration seems to have a hard time recognizing members of terrorist groups who are allowed into the White House.”

Napolitano insisted that Gohmert’s claims were “misleading,” and claimed that she was not aware of any classified documents being downloaded by Elibiary. The secretary kept a calm tone as Rep. Gohmert became increasingly aggressive — at several points raising his voice at her. “I’m asking you if you know simple facts,” he shouted at one point, interrupting her.

The secretary also took a shot at the congressman’s seeming obsession with Muslim infiltration of the government: “What bothers me, quite frankly, are the allegations that remain against anyone who happens to be Muslim,” she said. said.

“The allegations are not because he is Muslim,” Gohmert replied before delivering the “hugging Muslims” line as his defense against accusations of Islamophobia.

As Rep. Gohmert continued to get heated, Judiciary Committee Chairman Lamar Smith (R-TX) had to step in and make the congressman tone down his anger.

During the latter portion of the congressman’s allotted time, he repeatedly interrupted to accuse Napolitano of avoiding straight answers. “These kinds of insinuations demean the committee,” a frustrated Napolitano said at one point. “The insinuation that I or my staff would allow someone who is a terrorist to infiltrate –”

Rep. Gohmert interrupted to insist he was making “no such insinuation” and that he has met Elibiary, “a very nice gentleman.” Eventually Rep. Smith cut the congressman off, with others shouting “he’s out of order!”

Check out the battle below, via C-SPAN 3: