GOP Congresswoman Opens Up About Having a Transgender Child
video

GOP Congresswoman Opens Up About Having a Transgender Child 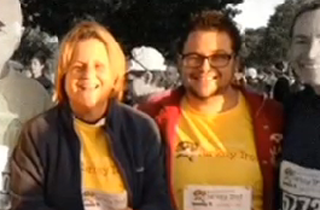 In an interview with CBS Miami, Congresswoman Ileana Ros-Lehtinen (R-FL) opened up about her transgender son, and how coming to terms with his decisions changed her opinions on LGBT issues.

Rodrigo Lehtinen, 28, was born as Amanda and began transitioning in 2007. Prior to the interview, he had never discussed his identity, citing a desire to remain private, but decided to go public with his experience last night.

“I think coming out as transgender is really about coming out as your authentic self, coming out as the person you always knew you were but no one else may have known,” he said. “And now you are sharing that honesty with other people for the first time.”

Not only were his parents accepting, but 100% supportive of his decision. “As parents we wanted to make sure Rigo understood we were totally fine with it,” Rep. Ros-Lehtinen said, but added, “we wanted to make sure he was safe. Our society is sometimes not inviting and not caring enough and there is no mystery that LGBT kids when they are younger are bullied.”

While Rep. Ros-Lehtinen had initially voted for the Defense of Marriage Act in 1996, she recently became the only Republican to vote for its repeal. Rodrigo believes that she would have come to those conclusions despite his transition, however: “I think she’s genuinely a good person, she may be Republican and I may not be, but she cares about people enough and the tide of history is going so much in that direction.”

“We know Rigo as our child, whether it’s Amanda or now as Rodrigo, he’s our son, we’re proud of him,” Rep. Ros-Lehtinen and her husband, former US Attorney Dexter Lehtinen affirmed.

As to parents whose own children may come out, the Congresswoman had this piece of advice: “Don’t freak out, stay calm and don’t be afraid. Love your child because that person is your child whether it’s the person you wanted him or her to be or not. That’s my advice to parents, never, never reject your child. That’s unconditional love no matter what.”

Watch below via CBS: