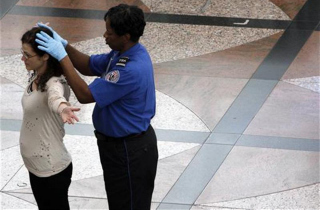 There aren’t many areas where we seem to be able to find common ground of late in the politically divided climate. But one thing that brings us all together, both left and right, is our frustration with the airline experience. Flying, to put it bluntly, sucks ass.

Yes, yes, surely we all want to prevent any potential attacks, but on the other hand, standing in line for an hour or two, each of us presumed a potential terrorist until proven otherwise, waiting to have our belongings rifled through and our bodies examined by the TSA, is an exceptional nuisance.

Is it all worth it? The answer might seem obvious: we trade lessening the risk of exploding in the sky for a little inconvenience. But for some it’s an outright assault on our liberty every time we open our bags to a federal agent.

One such skeptic is Bob Johnson, a Republican candidate for U.S. Congress in Georgia, who said that he’d rather take his chances with terrorists than suffer through the invasion off privacy that the TSA represents. Politico obtained a video of Johnson speaking at a candidate forum back in February where he made the incendiary remarks.

“Now this is going to sound outrageous, I’d rather see another terrorist attack, truly I would, than to give up my liberty as an American citizen,” he said. “Give me liberty or give me death. Isn’t that what Patrick Henry said at the founding of our republic?”

The TSA, he said, has been “indoctrinating generations of Americans to walk through a line and be prodded and probed by uniform personnel, agents of the government, like sheep.”

Kidding. Okay, half-kidding. Knee-jerk reactions to his crossing the line of decency we all seem to have agreed upon when it comes to talking about the boogeyman in the sky, he sort of has a point, right? But one wonders where we should draw the line. Complete and open air travel with no security? Or just dialing it back a notch? I certainly don’t appreciate being treated like a potential terrorist every time I want to travel, and the experience in general is dehumanizing, and infantilizing.

Johnson walked back his statement somewhat this week:

“In the heat of the moment, while making the point that I would much rather fight the enemy than our federal government, I said something stupid and should have chosen my words more carefully… As a Constitutional conservative, it angers me that we are giving up our liberty to the bureaucratic TSA and spying on our own people in the name of false security and that has to stop.”

That’s something on which I think we can all agree. None of us want to be spied on, but then again, none of us want to die. Some deaths, however, as anyone who’s tried to get through a security check of late can tell you, are a lot slower and less dramatic than others.