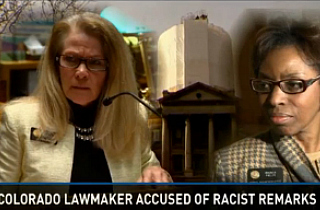 Controversy erupted in Colorado on Wednesday after a Republican legislator was accused of making racially insensitive remarks when she invoked images of barbecue and fried chicken while discussing the lower life expectancy among black Americans.

The comments came during a meeting of the state’s Economic Opportunity and Poverty Reduction Task Force. State Sen. Vicki Marble (R-Fort Collins), who is white, took the opportunity to address what she sees as an ongoing health problem among black citizens:

“When you look at life expectancy, there’s certain problems in the black race. Sickle cell anemia is something that comes up. Diabetes is something that’s prevalent in the genetic makeup. Although I gotta say, I’ve never had better barbecue and better chicken and ate better in my life then when you go down south. I mean, I love it. Everybody loves it.”

After Marble finished her remarks, State Rep. Rhonda Fields (D-Aurora), who is black, responded by calling her colleague’s comments offensive and rooted in negative stereotyping:

“One of the things I will not tolerate is racist and insensitive remarks about African Americans, the color of their skin, what you mentioned that we eat. I was highly offended by your remarks, and I will not engage in a dialogue where you are using these stereotypical references about African Americans and chicken and food. […] I would ask that you suspend your perceptions and judgments about African-Americans about poverty. What we’re trying to do is to come up with meaningful solutions. It’s not about eating chicken.”

Speaking with KUSA-TV, Marble later defended her comments, noting that poor eating habits among minority communities is something she often talks about with her black friends. “It’s not racist. It’s bringing out the facts so that you can be aware and take better care of yourself,” she said. “I cater weddings and do BBQ’s. That’s my favorite. Anywhere you go for a political thing it’s BBQ. We love it.”

Watch below, via KUSA-TV: