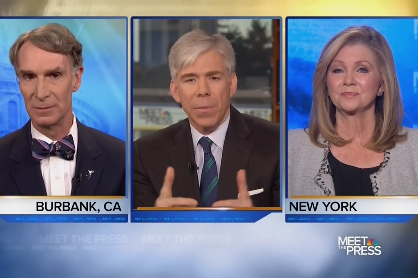 Rep. Marsha Blackburn (R-TN) appeared on Meet the Press on Sunday to debate former television host Bill Nye about the effects of climate change and how best to address those impacts through public policy. Blackburn also spent much of the interview debating Meet the Press host David Gregory who asked a series of pointed questions of the GOP representative which challenged her underlying assumptions.

Gregory began by citing a post in The Atlantic which summarized the Republican position on man-made global warming as acknowledging it exists but being wary of the proposed remedies which would negatively impact economic growth. “The fix can be very expensive in the short-term for long-term gain,” Gregory said.

Blackburn countered by asserting that “there is not consensus” that a slight increase in carbon in the atmosphere has resulted in widespread environmental effects. She cited a series of academic reports that challenge the notion of consensus.

Gregory interrupted the congresswoman and insisted that there is, in fact, consensus and that energy providers are actively attempting to manage their emissions. “The issue is what actions are taken and would they really work,” Gregory insisted.

“The congresswoman is trying to introduce doubt,” Nye insisted, “in the whole idea of climate change.”

Blackburn said there are “social costs” of carbon emissions, but there are also benefits relating to agricultural production. She concluded by noting that U.S. carbon emissions are as low as they have been since 1994, but they are on the rise in other nations and any solution to that issue must be a global one.