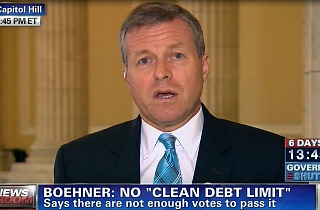 Appearing on CNN with Wolf Blitzer, Rep. Charlie Dent (R-PA) contradicted statements made by House Speaker John Boehner (R-OH) over the weekend who claimed that there were not enough votes in the lower chamber of Congress to pass a “clean continuing resolution.” Dent said the votes were there and that Boehner was trying to “conflate” the CR with the debt ceiling.

“I am going to insist that the speaker try to bring out a clean continuing resolution to the one I said I would support,” Dent told Blitzer.

He said that there was enough support in the House to get a motion through congress which would fund the government for six months and repeal the medical device tax within the Affordable Care Act. Barring that, Dent said, he would also support a “clean” continuing resolution.

“I would urge the speaker to bring it out for a voter,” Dent insisted.

“I believe the votes are there,” he added. “I suspect the reason why it’s not being brought out because it may violate the Hastert rule.”