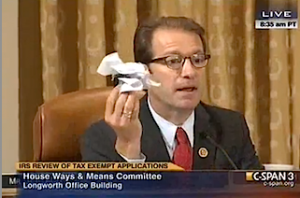 Acting IRS chief Daniel Werfel was back in front of Congress today, this time testifying before a House Ways and Means Committee hearing on his review of the agency’s admitted targeting of conservative groups. During his time questioning Werfel, Rep. Peter Roskam (R-IL) began berating Werfel over the heavily redacted documents members of Congress received, at one point dramatically crumpling the paper in his hand and exclaiming, “this is junk!”

When Roskam accused the IRS head of illegally withholding information from the committee, Werfel responded by outlining his attempts to balance transparency with privacy. “I want to make sure you understand and that your constituents understand the tension that exists, that we also have a solemn responsibility to protect the confidentiality of their tax-payer information.” Explaining that the full information is sent to the chairman of the Ways and Means and Senate Finance committees, Werfel acknowledged Roskam’s concern that there has been “over-redcation.”

The congressman cut Werfel off at that point by crumpling the report he held in his hand, saying, “this is junk. This has no meaning.” When Werfel pushed back, Roskam accused him of “hiding behind” the privacy issue. “I’m putting you on notice,” Roskam said, adding he’s going to “make sure the IRS is forthcoming and not creating a bunch of nonsense, hiding behind bureaucratic double-talk.”

Thursday’s hearings on the IRS controversy are the first since new information emerged that the agency had targeted “progressive” groups along with conservative ones.