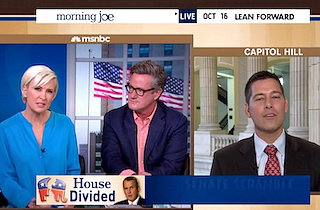 Representative Sean Duffy (R-WI), who recently made headlines for a heated exchange with Andrea Mitchell, went after another MSNBC anchor on Wednesday morning, this time telling Morning Joe co-host Mika Brzezinski that she was “part of the problem” for not pressing liberal guests on Obamacare.

“Mika, my mom is a good liberal,” Duffy said. “She loves you, she’s happy I’m on the show. But I think are you a part of the problem.”

“The Republican caucus sometimes can be unreasonable,” Duffy explained. “But look how far we want to move. We said we want to defund [Obamacare]. Now we want to delay it. Now we’re just going to ask for some very simple tweaks and reforms. If you actually called out your liberal guests and said, ‘Why won’t you join for Obamacare? If it’s good for Americans, why isn’t it good for you?'”

“You have a lot of good questions,” Brzezinski said (“I like asking you questions better, Mika,” he said). “But as ‘part of the problem,’ as you so kindly put it, I will ask you, very honestly: do you not think that members of your party, especially in Congress and in the Ted Cruz (R-TX) group are not imploding the Republican Party, big picture? ”

“Big picture, I think this was a horrible strategy,” Duffy said. “I came on your show and I said that. If we had allowed Obamacare to roll out and for two weeks America saw the dysfunction, and then as we roll into if debt limit and negotiate an increase, I think we would have got a one-year delay, because America would have said this is only the fair and right thing to do.”

“From a messaging standpoint, congressman, I agree with you,” Brzezinski said. “And your mom is fabulous.”