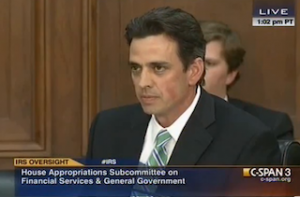 New acting commissioner of the IRS Daniel Werfel was on the hot seat in Congress for the first time Monday during a hearing before the House Appropriations subcommittee. The relatively subdued proceedings, in which Werfel and Treasury Inspector General J. Russell George answered questions regarding the IRS’ targeting of conservative groups, became a bit more heated when Rep. Tom Graves (R-GA) began asking Werfel about “accountability” for Lois Lerner and others.

Werfel confirmed that Lerner is currently on paid leave from the IRS after she plead the Fifth Amendment to avoid answering questions from Congress over her role in the targeting scandal. “Do you plan on clearing house, terminating anyone or holding anyone accountable?” Graves asked Werfel. When the commissioner explained that the IRS is still reviewing all of the information before making those determinations, Graves pressed him, saying, “we know that something has occurred here, and yet we hear there’s this long review process and yet no one has been held accountable.”

Werfel explained that figures such as Steven Miller, the former acting head of the IRS, was asked to resign and Graves responded, “So resignation is accountability, is that what you’re telling the American people?” When Werfel admitted that Lerner is still being paid while on leave, Graves shot back, “Is that your definition of accountability?”

Werfel calmly tried to answer Graves’ question with more than a simple yes or no. “There are two stages to accountability here,” he explained. “The first stage is based on the facts we have now to determine who can no longer hold a position of trust within the IRS. The second stage, which is I know where you’re going, is to determine whether there was any underlying malfeasance or issues to warrant dismissal. We’re going to follow the facts where they take us.”

Finally, Graves asked Werfel if he’s “satisfied” with the answers and information he’s seen so far on how and why the targeting happened. “No,” Werfel said, “we have to get to the bottom of it.” And no matter how far the trail goes up the chain of command, “we will uncover every fact.”

Watch video below, via C-SPAN3: