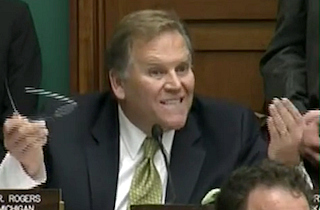 During testimony in the House Energy and Commerce Committee Wednesday morning, Representative Mike Rogers (R-MI) strongly lectured Health and Human Services Secretary Kathleen Sebelius about what he claimed were untested security precautions on HealthCare.gov, reading aloud from an internal memo that he said revealed the recklessly endangerment of user’s private financial information.

“You have exposed millions of Americans because you all, according to your memo, believed it was an acceptable risk,” Rogers said. “Don’t you think you had the obligation to tell the American people that we’re going to put you in this system, but beware, your information is likely to be vulnerable?”

Sebelius tried to rebut Rogers charges, stating that the memo Rogers had cited went on to detail weekly tests conducted on the site, but Rogers repeatedly cut her off, until Representative Henry Waxman (D-CA) finally interrupted. “I think the witness ought to be allowed to answer what was a speech by the colleague, because he’s raised a lot of issues,” Waxman said.

“You mean there’s been no other speeches here today?” Rogers said. “That’s shocking.”

“She didn’t admit that,” Waxman said. “You said it, she didn’t say it.” At that point, Rogers’ time expired.

Watch the full clip below, via CSPAN: