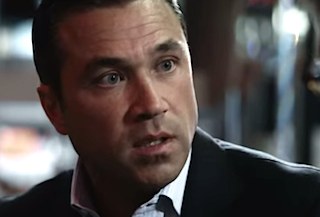 Rep. Michael Grimm (R-NY), the Staten Island congressman who was caught on camera physically threatening a NY1 reporter, is back in the news this week, but this time it has nothing to do with potential violence. For this week’s episode of the Showtime documentary series Years of Living Dangerously, Grimm recently sat down with MSNBC’s Chris Hayes and admitted that he now believes man-made climate change is real.

“The mass majority of respected scientists say that it’s conclusive, the evidence is clear. So I don’t think the jury is out,” Grimm told Hayes, a reversal from his previous position on the issue. “I mean there’s no question that, um, you know, the oceans have risen, right? And the climate change part is, is a real part of it.”

But in terms of what political action Congress can take to combat climate change, Grimm is still a skeptic, telling Hayes that between issues like immigration, tax reform and other issues, “there’s no oxygen left in the room in Washington for another big debate, that’s the reality.”

When Hayes came back at Grimm with studies that show how events like Hurricane Sandy, which devastated Grimm’s district, could be more prevalent in coming years if addressing climate change does not become a “priority,” Grimm said the “science and substance” of the issue becomes “irrelevant” when you’re dealing with a Congress that refuses to work together.

Four years earlier, during a GOP congressional debate, Grimm said, “I have been one of the guys who have been skeptical of global warming from the beginning. The jury is obviously still out on it. We see nothing but conflicting reports from across the globe. I’m not sure, I’m not a scientist.”

Watch video below, via Showtime: