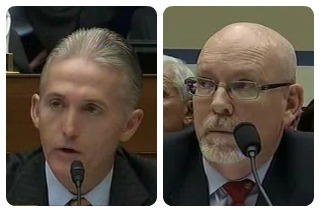 Rep. Trey Gowdy (R-SC) used his short time addressing former deputy chief of mission for the U.S. in Libya, Gregory Hicks, to establish the fact that the American diplomatic staff in Libya were “embarrassed” by the White House’s effort to blame the Benghazi attack on an inflammatory YouTube video. Gowdy established that the State Department had informed the Libyan government on the day after the attack that “Islamic terrorists” were likely behind the assault.

“When Ambassador [Christopher] Stevens talked to you perhaps minutes before he died, as a dying declaration, what did he say to you?” Gowdy asked.

Gowdy and Hicks established that there was no demonstration outside the consulate that day. He noted that U.N. Ambassador Susan Rice proceeded to blame the attack on a video. When asked what his reaction to Rice’s statements was, Hick’s replied, “I was stunned. My jaw dropped. And I was embarrassed.”

Gowdy read from a portion of an email form an aide to former Sec. Hillary Clinton which stated that the State Department had informed the Libyan government that the individuals who carried out the attack were linked to “Islamic terrorists.”

“Mr. Hicks, I want to know, number one, why in the world would Susan Rice go on five Sunday talk shows and perpetuate a demonstrably false narrative?” Gowdy asked. “And secondarily, what impact did it have on the ground in Benghazi the fact that she contradicted the president of Libya?”

Hicks declined to answer the first question, but said Rice’s statements helped facilitate introducing FBI investigators into Libya. Bureacuracy in Llbya hampered the investigation’s progress, however, and the crime scene was left unsecured for 18 days.