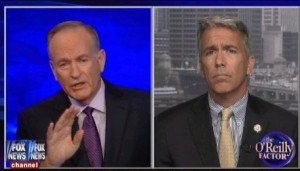 Bill O’Reilly hosted Republican congressman Joe Walsh on his show today to talk about Walsh’s recent comments that people like Jesse Jackson are brainwashing African-Americans to make sure they stay reliant on the government. O’Reilly called out Walsh for his accusation that Jackson is conspiring to keep black Americans “in virtual slavery to the federal government.”

RELATED: GOP Rep. Joe Walsh: Obama First Black President, ‘Country Voted For Him Because Of That’

It is Walsh’s contention that the Democrats are promising entitlements to certain groups of voters in order to buy their support. He defended his remarks by saying that his political rivals “want everybody dependent on government,” and a party that promises you all sorts of government benefits is likely to continue getting supported by these groups.

O’Reilly asked Walsh if he honestly believes that Democrats are gathering in secret to plot how to win over certain groups like Hispanics and African-Americans by creating government programs specifically for those purposes. Walsh agreed, comparing Democratic policies of expanded government to an addiction that he would like to wean people off. Of course, since Walsh contended that people have not woken up to the Democrats’ strategy, O’Reilly asked him if that insinuation comes off as offensive.

“Is it insulting for you and other Republicans to say, ‘Hey, you know, you guys are just not smart enough to realize what the Democrats are doing’?”

Walsh countered that if he was insulting anyone with his remarks, it was the Democrats. He accused liberal African-American leaders like Jackson of “being complicit in this thing” because they “want blacks dependent upon government” and doesn’t want them to have “opportunity.”

O’Reilly pounced, arguing that what Jackson would actually argue is he just wants black Americans to have the same advantages people like Walsh had. And while he admitted he personally agrees more with Walsh than Jackson, O’Reilly told the congressman he was lobbing a “serious accusation” by suggesting that Jackson is trying to keep black people “in virtual slavery to the federal government.” Walsh responded by saying, “I think he’s a race hustler, just like Al Sharpton is.”