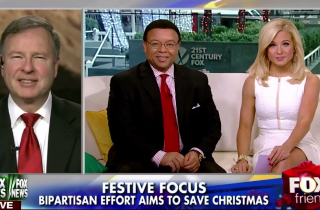 Rep. Doug Lamborn (R-CO) appeared on Fox & Friends Tuesday morning to discuss his new “bipartisan resolution to save Christmas,” which was positively received by the show’s fill-in hosts.

Fill-in host Anna Kooiman applauded the effort, citing how it would “protect” everyone’s ability to “say ‘Christmas'” or publicly display nativity scenes. She asked the lawmaker whether it’s “gotten more out of hand by the year”

Later in the interview, Lamborn explained that he is “encouraged and inspired by all faith traditions,” and that “if someone says Happy Hanukkah, I apply it to my own religion.” Citing that “we live in a pluralistic society,” Lamborn explained his belief “we need more tolerance of diversity and pluralism of society.”

His resolution, which would not be enforceable by law, does not mention or “protect” any holiday aside from Christmas.

At the conclusion of the segment, both hosts Kooiman and Kelly Wright thanked him for introducing the resolution.