GOP Rep. Raul Labrador on Crossfire: ‘We Were Elected to Stop the Obama Agenda’

GOP Rep. Raul Labrador on Crossfire: ‘We Were Elected to Stop the Obama Agenda’ 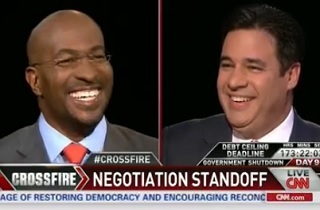 There was a time when it was a story, it was news that Republicans vowed to do whatever it took to make President Obama fail, that they met on the day he was first inaugurated to plan “unyielding opposition” to everything he tried to do. On Wednesday night’s Crossfire, Rep. Raul Labrador (R-ID) casually enunciated that same attitude as if he were describing Word proficiency on his resumé, and no one batted an eye.

Labrador was debating the House’s strategy of selectively funding the parts of government that get the most press, with former White House adviser Van Jones. “Isn’t this a bit of a trick?” Jones asked Labrador. “It does seem like you need to take these things that we complain about and… What would stop it from opening up everything but Obamacare? This makes me feel very sad. Why not just have a clean resolution? It should be a clean continuing resolution for the government, right?”

“It seems to me that they were sent there for a reason,” Labrador replied. “We were elected to stop the Obama agenda. We have been very successful.”‘

Because I don’t watch Crossfire, a friend flagged this clip for me, and was dismayed that Labrador’s casual admission, nay boast, went unnoticed by anyone on that panel, or anywhere else. That could be due, in some measure, to the trivial scorecard ethos of Crossfire, but it’s also a symptom of a mainstream media that sees politics as a pro wrestling match between indistinct opponents. Republicans don’t even have to conceal the screwdriver they’re bringing into the ring to jam into President Obama’s neck. It’s all just a show. It has long been apparent that Republicans have no interest in governing, but when did the media stop caring if they do?

Here’s the clip, from CNN’s Crossfire: