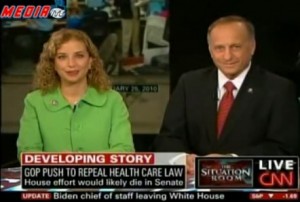 Buried in a segment on CNN’s The Situation Room Tuesday was a nugget of naked hypocrisy, courtesy of Rep. Steve King (R-Iowa). Debating the GOP’s kabuki health care reform repeal theater with Rep. Debbie Wasserman-Schultz (D-Fl), King was asked by Wolf Blitzer if he would follow the example of freshman Rep. Joe Walsh (R-Il) and refuse his taxpayer-funded health insurance.

While King gave Walsh “a lot of credit” for his stance, he indicated he would be keeping his benefits. Blitzer let it slide, of course, but we’ve got the video.

Here’s the segment, from CNN’s The Situation Room:

While the knee-jerk reaction is to call King a hypocrite for not refusing the insurance, I have to side with King here. It’s not hypocrisy, it’s naked self-interest, and completely consistent with GOP ideology.

What is hypocritical is his “giv(ing) a lot of credit” to Walsh, who’s turning down health insurance despite having a wife with a pre-existing condition. Left to fend for themselves in an individual market that still has 3 years left to discriminate against adults with pre-existing conditions, Walsh says he turned the insurance down because he doesn’t “want to burden the American taxpayer with my health care bill.”

This is sheer idiocy, unless he’s also agreed to forgo his government paycheck, and to complacently die should a medical catastrophe befall him. Otherwise, the taxpayers will still be paying for his health care bill, one way or the other. If he can afford to pay, it’s with our money, and if he can’t, we all pay anyway.

Furthermore, in the system he supports, health benefits are part of the compensation that employers offer, so his refusal of benefits is actually an anti-capitalist statement, to boot.

Finally, Walsh’s gesture ignores the GOP’s crowning achievement in the health care reform debate, keeping uninsured Americans out of the Federal Employees Health Plan, or any other kind of public option. Eliminating health coverage for Congress was never part of that.

Even so, if Walsh’s foolhardy martyrdom is somehow admirable, King has no right to give the guy credit if he’s not willing to do the same.

I’ve got a better idea, though. If Walsh really doesn’t want to “burden” taxpayers, he won’t waste his time on a fruitless attempt to repeal health care reform, which would throw millions of Americans off their health insurance, just like him.