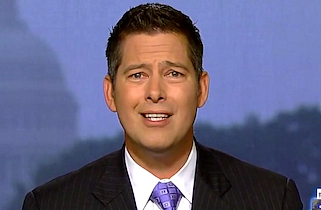 Representative Sean Duffy (R-WI)— “I want to call you Tough Duffy,” host Elisabeth Hasselbeck said—followed up a tempestuous exchange with NBC’s Andrea Mitchell yesterday by appearing on Fox & Friends Thursday morning and accusing the “liberal media” of allowing the Obama adminstration to sidestep tough questions on the Affordable Care Act and the government shutdown.

“I think the president is taking softball questions,” Duffy argued. “You look at [Sam Stein of] the Huffington Post, asking easy questions to the president. He doesn’t want to be asked the hard questions, like why won’t you join Obamacare? Why isn’t your wife at the computer signing up like other families and other Americans trying to get onto the website? Because they don’t have a good answer for that.”

“So they want to skirt around the tough questions and the reasonable proposals from our side of the aisle and get easy questions that tee them up to sell their story,” Duffy said. “But I don’t think that can last very long. You’re starting to see the liberal media crack, and tell some of these stories. Wolf Blitzer was out saying, maybe the Republicans were right, maybe there should have been a one-year delay after we’ve seen how poorly Obamacare has been rolled out.”

“Jon Stewart at Comedy Central was the first one to ask, not even a tough question—a question to the administration about why they won’t join us in some reasonable proposals,” Duffy continued. “And Kathleen Sebelius, the secretary of Health and Human Services, couldn’t answer their question. They’re just not used to getting asked any tough questions in regard to this current debate on the shutdown.”