GOP Rep. to Rep. Gohmert: We Gave Base ‘False Interpretation’ That ObamaCare Could be Defeated 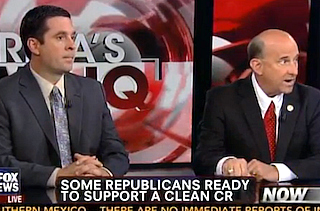 Representatives Devin Nunez (R-CA) and Louie Gohmert (R-TX) disagreed on Fox News Sunday afternoon over the wisdom of shutting down the government over ObamaCare, with Nunez arguing that some GOP members had misled the conservative base into thinking ObamaCare could be repealed through funding maneuvers, when such a strategy was never viable.

“When we first started out on this strategy, I thought it was a big mistake to say that we were going to get rid of ObamaCare,” Nunez said.

“I thought we had the moral high ground on the individual mandate, because President Obama put in the employer exemption delay. I think we should have fought on that for three months. Instead, I think we’re giving our base—and I’m a conservative Republican, just like Louie—the false interpretation that somehow by not funding the government, we’re going to get rid of ObamaCare, and we simply don’t have the votes to do that.”

“I don’t think that anybody is mistaken and thinks that we’re going to completely get rid of ObamaCare,” Gohmert said. “The second thing we sent down was nothing but a delay for a year…The third thing we sent down was simply to delay for one year the individual mandate, give everybody in America what big business got…But [Democrats] are so invested in shutting things down.”

“The perception out there is Republicans, even though as Louie said we have sent over small funding appropriation bills, and they won’t take anything up,” Nunez said. “As foolish as I think as some in our party has been on this strategy to shut down the government on the day ObamaCare opens, now we’re getting up to the debt limit. The president is being more foolish, and this could be a situation in which two fools meet and we all get hurt.”

“I think it’s tragic you have a United States president who says when a bill is voted by both houses and I sign it and it bears my name, and the Supreme Court doesn’t overturn it, then it’s the law and we’re not changing it,” Gohmert said. “I’ve never heard a president say that before. And that’s exactly where the debt ceiling is. Both houses passed it, he signed it into law, it bears his name. So if he’s going to be so recalcitrant, he’s going to find the debt ceiling is exactly as he described it: it’s not going to move if he’s not willing to help us deal with the debt.”