GOP Rep: ‘We Should’ve Done More’ to Get Russia to Back Off Invading Georgia
video

GOP Rep: ‘We Should’ve Done More’ to Get Russia to Back Off Invading Georgia 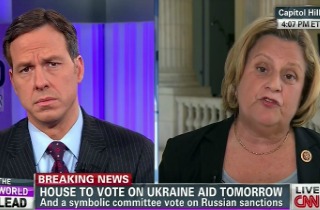 Rep. Ileana Ros-Lehtinen (R-FL) joined CNN host Jake Tapper on Wednesday where she advocated for the unilateral expansion of U.S. sanctions to include Russian human rights violators involved in the invasion of the Crimean Peninsula. Pressed by Tapper about whether the United States should have been stronger in its response to Russia’s 2008 invasion of the Republic of Georgia, Ros-Lehtinen confessed that the United States “should have done more.”

Ros-Lehtinen began by advocating for the expansion of the Magnitsky Act to include officials in the Russian government in response to the invasion of Ukraine. She said that Russia’s threat to seize Western assets in Russia in response to those sanctions would be a strictly “punitive action.”

“I think that Putin is putting us to the test,” she said. “Are we going to back up our word with actions, or is this going to be a situation like Syria.”

RELATED: Sec. Kerry: Putin ‘Not Operating From Position of Strength’

“In retrospect, was it a mistake for the U.S. to have not done more after Russia invaded Georgia in 2008?” Tapper asked.

“I think standing now where we are and looking back on that situation, yes, we should have done more,” Ros-Lehtinen replied. “Just like we had situations in Iran when the dissidents were standing up and we turned the other way. Just like in Syria, when the opposition was clear that they were the good guys, that we should have helped out more. But it’s hindsight.”

“I hope that we don’t’ talk a big game and then just play small ball,” she concluded