GOP Rep.: Where was Dem Outrage ‘When They Fundraised Endlessly’ off Iraq War?
video

GOP Rep.: Where was Dem Outrage ‘When They Fundraised Endlessly’ off Iraq War? 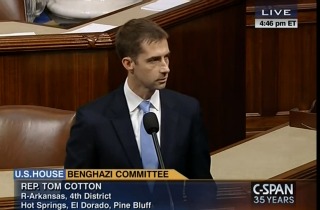 Rep. Tom Cotton (R-AR) took to the floor of the House on Thursday during a debate over the establishment of a select committee to investigate the Benghazi attack where he strongly criticized Democrats for condemning Republican committee fundraising solicitations relating to the investigation. Cotton said their outrage was hypocritical, and asked where their indignation was when he was serving in Iraq in the armed forces and Democratic committees were pitching donors by citing American deaths in that theater of war.

Cotton attacked President Barack Obama for failing to perform the tasks required of rank and file soldier by failing “to stay in the situation room to supervise the execution of his orders.”

“We expect more of lieutenants in the army than our president gave us that night,” Cotton asserted.

“Forgive me if I don’t join my Democratic colleagues in their fake outrage,” Cotton concluded.