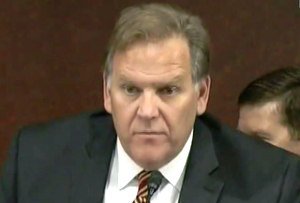 Today’s hearing at the NSA mostly consisted of softballs being lobbed at the intelligence heads, with a few tough questions about spying on foreign leaders here and there. But perhaps the most shocking moment of all came when the Republican head of the House Intelligence Committee actually suggested that it’s impossible to have your privacy violated if you don’t know that your privacy is being violated.

Republican Congressman Mike Rogers was interrogating American University College of Law professor Stephen Vladeck over his concerns about NSA surveillance programs, poking and prodding a professor more aggressively than most members of Congress have dared do with the people actually making these decisions behind closed doors.

Vladeck rightly asked, “But who would be complaining?” And that’s when Rogers dropped this piece of knowledge.

I’ll just repeat that last bit, in case you didn’t read it right.

This is the individual who runs the House committee that is supposed to conduct oversight of American intelligence agencies.

Watch the video below, via C-SPAN 3: