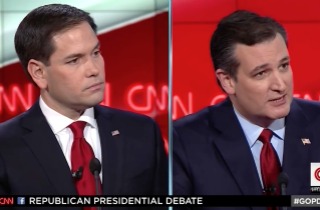 A Republican member of the Senate Intelligence Committee told reporters today he is looking into whether Ted Cruz revealed classified information during last night’s Republican debate.

The moment in question here concerns a fierce back-and-forth between Cruz and Marco Rubio over government surveillance. Cruz defended his vote in favor of ending bulk NSA collection of Americans’ phone metadata. A pro-Rubio group attacked Cruz over it and Rubio repeated the criticism last night.

Cruz argued that the program already in place “only covered a relatively narrow slice of phone calls.” Rubio shot back that the legislation Cruz backed stripped the NSA of its ability to quickly check records of terror suspects and those they’ve been communicating with.

Cruz countered by saying Rubio’s being deceptive, explaining, “What he knows is that the old program covered 20 to 30 percent of phone numbers to search for terrorists, the new program covered nearly 100 percent.”

When Rubio jumped in, he said, “Let me be very careful in answering this, because I don’t think national television in front of 15 million people is the place to discuss classified information.”

And in case you’re wondering whether Cruz revealed any classified information, so is Senate Intelligence Committee member Richard Burr. The North Carolina Republican told reporters today, “I’m having my staff look at the transcripts of the debate right now”:

“The question had been raised therefor I asked them to look at it and see if there was any validity to it,” Burr told reporters, “Anytime you deal with numbers, and I think it dealt with numbers, the question is: Is that classified or not or is there an open source reference to it. So it’s not as clear as just reading what he said. We’ve got to search all sorts of media outlets to see if anybody had reported the number independently.”

And if you’re wondering why Burr didn’t see the video for himself, it’s because the debate was on at the same time as The Voice finale and it was an easy choice to make.

You can watch the debate exchange in question above, via CNN.

No Cruz breach at GOP debate
Senate Cmt: "is not investigating anything said during last night’s Republican Presidential debate.”

And Cruz himself pushed back against the suggestion he revealed any classified information, blaming the Rubio campaign for the implication: