GOP Sen. Slams Immigration Bill, Citing NSA Controversy: Why Would That ‘Work Out Any Better?’
VIDEO

GOP Sen. Slams Immigration Bill, Citing NSA Controversy: Why Would That ‘Work Out Any Better?’ 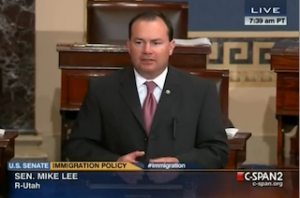 The growing outrage over the NSA surveillance programs, authorized by the Patriot Act, which came to light yesterday, made its way to the floor of Senate Friday morning. Senator Mike Lee (R-UT) referenced the programs as justification for members of both parties to oppose the “sweeping” immigration reform proposal.

“Did the American people have any idea that the Patriot Act would empower the National Security Agency to spy on all Americans through their cell phones and their computers?” Lee asked his fellow senators. “What makes any of us, least of all any conservative, believe this immigration bill is going to work out any better?”

“The lesson we should be taking from our recent mistakes is not that we need to pass better huge, sweeping new laws,” he continued, “but that we should instead undertake major necessary reforms incrementally, one step at a time, and in the proper sequence.”

Lee used the NSA controversy, along with conservative opposition to Obamacare, to reject the idea of “thousand-page bureaucratic overhaul” as inherently creating “far more problems than they intend to solve.” He added, “We can achieve comprehensive immigration reform without having to pass another thousand-page bill full of loopholes, carve-outs and unintended consequences.”

Of course, this is not the first time a member of the Republican Party has used the big news of the day to argue against comprehensive immigration reform. Following April’s Boston Marathon bombings, Rep. Steve King (R-IA), believing that a Saudi national was responsible for the attacks, cautioned against moving forward with a bill that he said amounted to “amnesty.” At the same time, Sen. Bob Menendez (D-NJ) used the Boston bombings to argue in favor of immigration reform, saying the background checks on undocumented immigrants could have prevented the attacks.