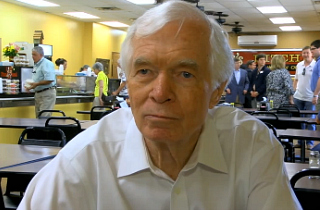 To repeat: A sitting U.S. Senator has no idea that the second-most important member of his own party in the U.S. House of Representatives was just unseated in a major primary defeat.

During an interview with Fox News on Friday, Cochran was asked whether he believes Cantor’s defeat means anything for his own Mississippi GOP primary runoff election against tea party challenger Chris McDaniel. The exchange that followed is… surprising:

COCHRAN: I don’t know what you’re talking about. What happened in Virginia?

COCHRAN: Well, I haven’t really followed that campaign very closely at all.

FOX NEWS: So you have no comment that you want to make?

COCHRAN: No, I can make a comment. You asked me what happened, I don’t know. I didn’t follow that campaign very closely.

COCHRAN: Yeah, well, that happens. You know, members of Congress, some win, some lose.

UPDATE — 4:26 p.m. ET: Cochran apparently had no trouble answering questions about Cantor just minutes before. So… as the Daily Beast’s Ben Jacobs suggests, the 76-year-old senator was just being “peevish” and “crotchety.”