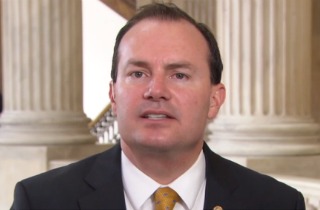 An interview between Newsmax’s Steve Malzberg and Republican Senator Mike Lee got heated after Malzberg pushed Lee to endorse Donald Trump, leading the Utah senator to go on an extended anti-Trump rant.

Malberg pressed Lee on the issue, saying that a Hillary Clinton presidency would be far more dangerous to the Constitution. “Hey look, Steve, I get it. You want me to endorse Trump,” Lee replied.

“I don’t understand why you’re not, really,” Malzberg admitted.

The senator did say that he would reconsider “…if I heard the right things… But don’t sit here and tell me, Steve, that I have no reason to be concerned about Donald Trump.”

Malzburg bristled a bit, asking if Lee was opposing Trump for personal reasons because of his attacks on Rafael Cruz. “He said that! He actually said that. He said that without any scintilla, without a scintilla of evidence. Now that concerns me,” Lee responded.

Watch above, via Newsmax.