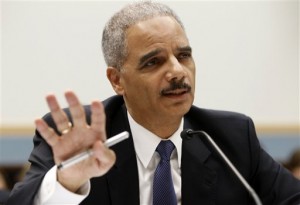 In a Senate committee hearing today in which Attorney General Eric Holder was asked to testify over his Department of Justice’s investigations into the botched Fast and Furious gun walking scandal and recent intelligence leaks from the Obama administration, Sen. John Cornyn (R-TX) called on Holder to resign. He appeared on Fox News Channel on Tuesday where he said placing “an Obama campaign volunteer in the investigation of these leaks,” shows that Holder is more interested in providing “political cover” for the Obama administration than enforcing the law.

Cornyn told Fox anchor Jenna Lee that the mounting scandals that have engulfed Holder’s DoJ forced him to determine that President Obama should replace him.

“Unfortunately, it’s been the culmination of stonewalling by the Attorney General on the investigation into Fast and Furious, but now culminating with his attempt to place an Obama campaign volunteer in the investigation of these leaks — national security leaks — that could well go to the top of the administration,” said Cornyn.

Cornyn said that Holder agreed that there should be an independent investigation into the leaks of sensitive intelligence information.

“He’s shown himself incapable of separating himself as an arm of the Obama administration and an independent attorney general that’s supposed to be the chief law enforcement for the country,” said Cornyn. “So, it’s time for him to go.”

Lee asked Cornyn to clarify if he was asking Holder to resign over Fast and Furious or the leaks specifically.

“It’s a combination of the two,” said Cornyn. He went on to say that he has always had reservations about Holder prior to his confirmation. He went on to accuse Holder of providing “political cover” for the Obama administration.

Watch the hearing below via C-SPAN: