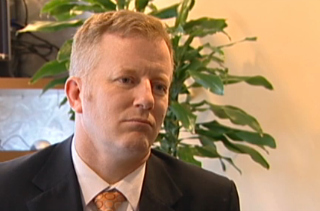 Another day, another lawmaker comparing some current policy to Nazi Germany.

Thought of the day.

“While Stacey Campfield routinely makes remarks that are over the top, today’s comments are ignorant and repugnant. No political or policy disagreement should ever be compared to the suffering endured by an entire generation of people. Those comments have no place in our public discourse. He should offer an apology to members of the Jewish faith immediately.”

As of 2:10 p.m. ET, the blog post is still live on Campfield’s website. As the GOP chairman noted, the lawmaker has a penchant for making over-the-top remarks, so it wouldn’t come as a surprise if he stands by this one.

Update — May 5, 4:13 p.m. ET: In an interview with the Associated Press, Campfield dismissed the criticism:

[…] Campfield said Monday he was unmoved by the criticism from the chairman of his own party.

“He never called me,” he said. “If he wants to apologize to Obama, he can.”