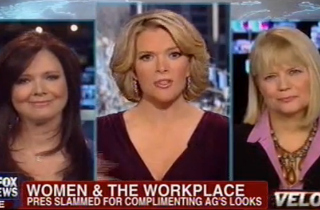 During a Megyn Kelly political panel this afternoon, a GOP strategist Dee Dee Benkie took the surprising position of defending President Obama from criticism that he was “sexist” for calling California’s Kamala Harris is “the most attractive attorney general.”

Women’s activist Sam Bennett told Kelly that her research has shown, “unequivocally,” that “focus on hair and makeup … is just as damaging to women as out-and-out misogynistic statements.”

When asked if the president had done anything wrong by pointing out Harris’ attractive looks, GOP strategist Benkie said “This is a beautiful woman; what’s wrong with saying that? I don’t understand what the big deal is. She suggested that the controversy surrounding Obama’s remarks has “gone over the top.”

Bennet reiterated that as soon as you talk about a woman’s appearance, “research shows she drops electorally like a stone.” She also praised Kelly for being a “great champion” of an issue like this.

The Fox host then recalled the controversy over sports announcer Brent Musberger complimenting a beauty queen in the stands for her attractive looks. “Do you see a difference between, that woman that he was complimenting is a beauty queen? She has placed her beauty in the public square for comment and affirmation,” whereas Harris is a “law enforcement officer” whose looks are irrelevant to her occupation.

“President Obama is getting a bad rap,” Benkie said. “I’m not going to defend him often, but this is very fair. This is a talented, smart, beautiful woman. And to call her beautiful is a compliment. And that is all it is.”