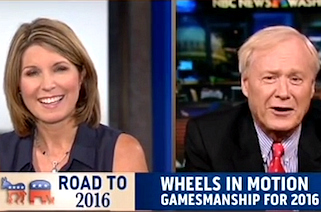 Former John McCain aide Nicolle Wallace momentarily stumped Chris Matthews on Tuesday morning, when she asked on Morning Joe how Barack Obama’s “hope and change” looked to him five years later. Matthews eventually diagnosed Obama’s main shortcoming: that he had mastered the art of oration too early and never honed the politicking portion of his job.

“What people signed up for, what people voted for, was the hope and change,” Wallace began. “How’s it look on the table five years later?”

“I didn’t order it,” Wallace said.

Matthews acknowledged that he had fallen for politicians and been let down before, especially in the case of Gene McCarthy (and Nixon?). But when Nicole Wallace pressed him on Obama, he replied:

“I’ll tell you Obama’s shortcoming, and it’s quite bipartisan in assessment, it’s exactly what you would say. Usually politicians take a while to develop a public speaking manner to where they are really good at it. It took Churchill a long time—he had a stutter and all kinds of problems, as Joe and you guys know—and he developed a great speaking pattern. Jack Kennedy was never a good speaker until 1960 where he was gangbusters. He really developed a public persona. All that time, in the fifteen years in kennedy’s case and Roosevelt and all those people, they were developing the back room skills, one-on-one skills, how you make friends, how you become class president, how you establish the loyalty of people one-on-one?

“The key political asset is the ability to sit in a room with four or five other people and have them accept your leadership, on either side of the party. Obama doesn’t have that. He had the speaking skill way ahead of schedule, the inspiration ability, the charisma. What he has never developed is a love—and that’s the right word for it—of politics, and love of other politicians, to love to sit around and play cards with them, to try to get to know them, their nuances, how to get to them, their hooks, their triggers, their buttons, get to know them and figure out how you can work with some of them, even tough customers like Eric Cantor, Boehner, get to know the tea party sentiment. Try to figure out what is it you can give them.”

“I’m with you on that,” Matthews agreed.