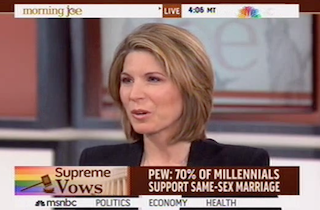 With the Supreme Court set to hear arguments on Proposition 8, the gay marriage ban in California, the Morning Joe panel tackled the issue of marriage and how the tide of public opinion has evolved. The discussion found a near consensus when it came to the “lightning pace” of change on the issue — with Nicolle Wallace, former communications chief for George W. Bush, asserting that even the youngest, “most devoted” conservatives find it to be an “equal rights issue.”

California especially is in a different place now than in 2008, Steve Schmidt argued, adding that a ballot initiative held now would result in gay marriage becoming legal. Schmidt and Wes Moore agreed on the “lightning pace” at which the country’s opinion on the issue has shifted, with Moore adding that the court, while making its decision on a legal basis, won’t be deciding within a “bubble.”

“This is in the back of their mind, seeing where the country is going,” he said, predicting “rapid movements that will align the legal precedents around this.”

Later in the segment, the discussion turned to the Republican Party steering their way through the issue, at which point Wallace brought up CPAC where “a lot of alarming things” happened.

“The one happy thing was that they went around trying to find young conservatives who were against gay marriage, and they couldn’t find any,” she said. “I mean, even the youngest, most devoted conservatives see this as an equal rights issue.”

“We’re going to be saved by the generation coming out behind us on a lot of fronts, because they just don’t see the world in this divided way that all of our politics have become hardened,” Wallace added.

Tolerance is important, she argued. “We as a party have to understand there are people with different opinions on this and certainly hope for them to continue to evolve.”