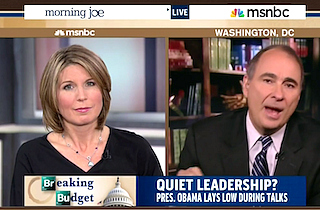 Former George W Bush aide Nicolle Wallace thoroughly bewildered former Barack Obama advisor David Axelrod on Morning Joe Monday morning, when she asked why the president wasn’t meeting with moderate Republican Senators over the impending shutdown, even as she conceded that the GOP was “imploding” over “an idiotic tactic.”

“Isn’t there a moment where the president has to be the president?” Wallace asked. “There were a lot of opportunities last week for the president to bolster Senators in both parties who were calling for what he seems to want, which is to avoid a shutdown, but I just—I can’t figure out what the president wants. He’s either incapable or unwilling to lead this country out of this brink.”

“You say, ‘When is he gonna step up and be president? When is the presidential moment?'” Axelrod responded. “This is the presidential moment. If you submit to government by extortion, government by tantrum, where does it stop? If he compromises this time and cuts off an arm, what’s to stop these guys from doing it again in two months and saying ‘Give me a leg?’ This is not the way to govern.”

“No one is debating that the Republicans are imploding over an idiotic tactic,” Wallace said. “I don’t disagree with that. But what I don’t understand why is President Obama lowering himself to that level and playing the same kind of brinksmanship that Ted Cruz is?”

“The presidential opportunity to me seems to be an opportunity for the White House to strengthen the Senate Republicans who share his desire not to see the government shut down,” Wallace said. “There seems to be enough of a desire in Congress on both sides of the aisle for the government not to shut down, and it seems like when President Obama acts like a victim of one rogue Republican Senator, it seems to weaken the office of the president.”