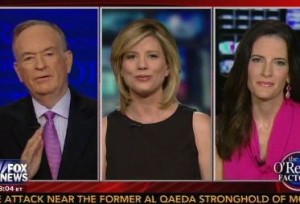 Bill O’Reilly continued to go after President Obama tonight over his continued refusal to talk about radical Islamic terrorism in the wake of the Boston Marathon bombings. Both of O’Reilly’s panelists, Kirsten Powers and Republican strategist Kate Obenshain, agreed with O’Reilly’s point on liberals in general being unwilling to condemn the actions of terrorists. Powers said they tend to equate saying “Islamic terrorism” with Islamophobia, while Obenshain told O’Reilly that liberals actually find the hostility terrorists have to America’s freedoms “appealing.”

O’Reilly suspected that liberals are already trying to tout the theory that the Boston bombers were just lone wolves and were not being helped out by others because that would mean a crackdown on the responsible party, and, as O”Reilly put it, “the left does not like crackdowns.”

Powers said that she mostly agrees with O’Reilly’s point, but differed with O’Reilly’s conclusion in that liberals wouldn’t mind FBI crackdowns on the Tea Party or right-wing militias. She noted that just the mere uttering of the phrase “Islamic terrorist” has become racially tinged, and people who use it are immediately labeled as racist or Islamophobic. O’Reilly found it odd that liberals would not want to be more critical and outspoken against jihadists who oppress women, gay people, and other minorities. Powers attributed it to an attitude of multiculturalism.

‘It’s not anti-Muslim to criticize Islamic jihadists. In fact, if you think it is, you probably don’t understand what Muslims are.”

O’Reilly and Obenshain repeatedly hammered Obama for “political correctness run amok” in trying to avoid using phrases like “Islamic terrorist” (though Joe Biden today had no reservations in calling them “knock-off jihadis”) Obenshain added her two cents on why liberals may actually find what Islamic terrorists do “appealing.”