GOP: The ‘Party Of and For the Rich?’ Joe Concha Talks Richest Congress Members on CNN 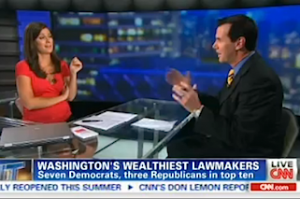 Mediaite’s Joe Concha joined CNN’s Erin Burnett Friday evening to discuss the recently released annual list of the richest people in Congress. He noticed that the breakdown of the list just might challenge the accepted wisdom that Republicans are the “party of and for the rich.”

The top two members on the list are Republicans, with Rep. Darrell Issa (R-CA) at number one with $355.38 million and Rep. Michael McCaul (R-TX) at number two with $114.10 million. Number three is Sen. Mark Warner (D-VA) with $96.31 million. But, as Burnett pointed out, while the top 50 may have been evenly split along party lines, the top 10 contained seven Democrats and only three Republicans.

Roll Call’s Adriel Bettelheim, who put the list together, said he sees the split swing back and forth depending on the election cycle. “One thing’s for sure,” he said. “Both parties really like to recruit wealthy people who can finance some or all of their campaigns.” He also pointed out that most of the Congress members on the list were not “self-made” but rather married into or inherited their money.

“The party of and for the rich are Republicans, right?” Concha asked. “Well, not on this list.” He said Issa, who “blows everyone else away” at number one, was particularly “fascinating” given his history of stealing a Maserati at age 17. “He was a thief with fine taste,” Concha said, “like Danny Ocean.” And unlike other wealthy members of Congress, he donates his entire salary to charity, something Concha said would be a good way for others to “score easy political points.”

Agreeing with Concha on Issa’s story, Stephanie Miller remarked, “How brilliant to be a car thief and think of a car alarm company?”