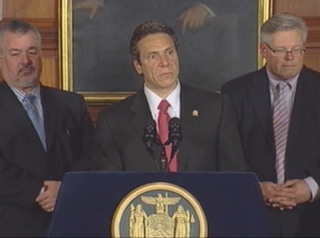 Shortly after the New York State Legislature passed a bill legalizing civil marriages for same-sex couples, the state’s governor, Andrew Cuomo took the podium in Albany to address the state’s residents on the historic vote. “We reached a new level of social justice this evening,” Gov. Cuomo told listeners, concluding that the vote, and the legislative session tonight in general, made him “especially proud to be a New Yorker tonight.”

After taking a moment to applaud the legislative leaders that stayed overtime tonight to pass the law, the governor addressed the progress that the bills passed tonight would mean for the state. “These past 6 months,” he noted, “we didn’t work like we were Democrats and Republicans, we realized we were New Yorkers first.” He then turned to the people of New York, thanking them for being involved in the process: “democracy works when the people speak, and the people spoke in volumes.” While he was thankful for the passing of every bill on the docket, he noted that the Marriage Equality Act “brings it all home,” and was in sync with the history of the state.

“This state, when its at is finest, is a beacon of social justice,” he declared, stating that “the legacy is that we are the progressive capital of this nation,” and that “the other states look to New York for the progressive direction.” With that responsibility, “New York made a powerful statement,” he continued, not just for New Yorkers but for Americans: “We want equality in our love, in our families, we want full recognition and we did it today.”

The speech via CNN below: