Gov. Barbour: GOP Presidential Candidate May Be An Unknown Coming From Nowheresville 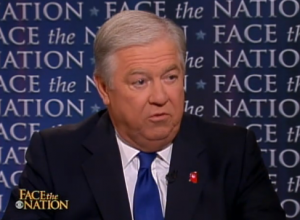 Governor Haley Barbour may not be running for President, but that didn’t stop him from speaking to Bob Schieffer earlier today about presidential politics, and most specifically, issuing a warning to his party not to prioritize purity over party unity.

Schieffer confronted Barbour with poll results suggesting many Republican primary voters are disappointed with the current field of potential Republican candidates. Barbour was quick to defend them, while also remaining hopeful that more candidates might be on their way:

“The fact of the matter is, this field includes people who have been very successful as governors, a former Speaker of the House, people who have been successful in business. But a lot of them are not very well-known. And that’s what presidential nominating contests are about. And as I say, Barack Obama came from Nowheresville at this time to being president . . . I think the same thing can happen for us if the election is about Obama’s policies and the results of those policies. That’s the key for the 2012 campaign for Republicans.”

Barbour believes that the field of candidates will not be fully formed until the Fall. At that point, he wants Republicans to remember that “purity in politics is a loser, unity in politics is a winner.” And given that he believes Obamacare is making it hard for Americans to be hired and given that the government is “sucking trillions of dollars out of the economy,” Barbour seems confident that on the issues alone, the Republicans will have a good chance of beating Obama in 2012.