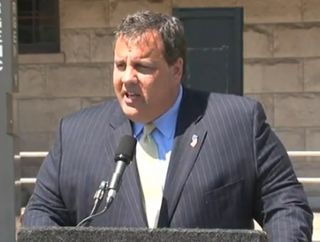 At this juncture, it may be more efficient to highlight which interactions between New Jersey Governor Chris Christie and the media are not newsworthy. The Republican’s appointment of Muslim-American Sohail Mohammed to a state bench this week ruffled some feathers among some who fear the threat of Sharia Law, but when asked about those concerns, Gov. Christie made clear he had no patience for such “ignorance,” calling the complaints “crap.”

“Ignorance is behind the criticism of Sohail Mohammed,” he told a reporter asking about the complaints that he may be inadequate to be a judge because he defended Muslim Americans who were wrongly arrested post-9/11. “He is an extraordinary American who is an outstanding lawyer and played an integral role in the post-September 11th period in building bridges between the Muslim American community in this state and law enforcement,” Gov. Christie argued, adding that he was “disgusted, candidly, by some of the questions he was asked… at the Senate judiciary committee.”

But it was a follow-up question on the fear of Sharia Law that set the governor off. “Sharia Law has nothing to do with this at all, it’s crazy!” he cried. “The guy is an American citizen!” He concluded that the “Sharia Law business is just crap… and I’m tried of dealing with the crazies,” adding with disgust and frustration that “it’s just unnecessary to be accusing this guy of things just because of his religious background.”

For most blue state governors, a fervent statement of support for a Muslim appointee would not exactly be news. It wouldn’t be news for a red state governor under most circumstances, either, but 2010 and 2011 haven’t precisely been the most Muslim-friendly years in American politics, the former being defined by the “Ground Zero Mosque” nontroversy and the latter seeing the looming “threat” of Sharia Law gain traction in Republican primary debates. Primary debates, it should be noted, in which many Republicans would have loved to see Gov. Christie participate.

Sure, the clip is entertaining because any clip of Gov. Christie being combative at a reporter is so, but it is particularly significant in that it gives one an idea of what Gov. Christie would sound like on the matter as a presidential candidate. It begs the questions: what would Gov. Christie have said on a podium across from Herman Cain while he insisted that “American law in American courts, period” was one of the more important platform issues of his campaign, or how he would respond to other states banning Sharia Law? The topic seems to put him in a far more centrist position than many others running.