Gov. Christie On Palin And Difference Between “Straight Talk” And Vitriol 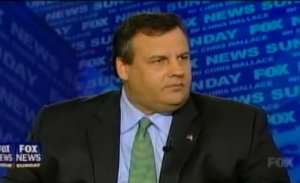 Governor of New Jersey Chris Christie appeared on Fox News Sunday and made it very clear that he thinks his unique “straight talk” is not the type of political rhetoric that needs to be toned down. As evidenced during this interview, Christie’s language, which some may find coarse, is much more likely to spark laughter than violence, so fans of unpredictable and blunt commentary will continue to not be disappointed whenever Christie speaks.

Christie shared his observation on Sarah Palin and her scripted video response to the Arizona shooting:

“People learn the most about you . . . during those unscripted moments when you’re not being handled or told what to say, but you have to react to situations like this. . . . If you avoid those unscripted moments, I don’t think that the American people will trust their instincts about whether you in fact would make a good president or not.”

When host Chris Wallace doubted if Christie’s confrontations with teachers and other political opponents were civil, Christie passionately argued there is a distinction between vitriol and straight talk. Christie elaborated:

“What I think the President was talking about was the type of things where people are getting so emotional and trying to get people to become in some cases violent. . . . What I’m doing in New Jersey is when they ask me a question, I give an answer.”

The humorous interview also included Christie’s thoughts on his effective threat to eat pizza and do nothing else unless a compromise was reached on the state’s budget, his “good looks” and his advice to national Republicans to “put up or shut up.”