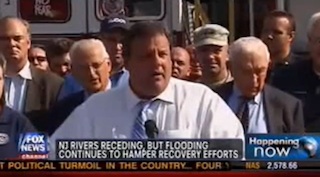 Recently, there’s been a lot of debate over House Majority Leader Eric Cantor’s assertion that any relief efforts for those affected by Hurricane Irene need to be offset by set spending cuts due to FEMA’s lack of money. Unsurprisingly, many weren’t thrilled with the idea of having to go through bookkeeping before trying to help Americans. However, at least one man who knows a thing or two about FEMA, Mike Brown, agreed with the need for Cantor’s pragmatic approach. Yesterday, though, another man who knows a thing or two about what’s happening right now chimed in as New Jersey Gov. Chris Christie kindly requested that Congress waited to discuss budget cuts until after large portions of his state are completely flooded.

Christie appeared at a press conference with U.S. Secretary of Homeland Security Janet Napolitano. He said that this wasn’t a “Republican or a Democratic issue,” just one that needed to be handled as soon as possible, pointing out that there was no talks of offsetting any budgets when Joplin, Missouri was hit with devastating tornadoes a few months back and there shouldn’t be now until his state was safe.

“You’re going to turn it into a fiasco like that debt-limit thing where you’re fighting with each other for eight or nine weeks and you expect the citizens of my state to wait? They’re not gonna wait, and I’m going to fight to make sure that they don’t. I don’t want to hear about the fact that offsetting budget cuts have to come first before New Jersey citizens are taken care of.”

Christie has been vocal in his support of FEMA during this disaster, despite his previous fights with other federal organizations and employees and the feelings from some in his party that this situation can be used to push through necessary cuts.

Watch clips of some of Christie’s comments from Fox News below: