Governor Northam’s Bonkers Press Conference Blows Up Twitter: ‘This is Better Than the Super Bowl’ 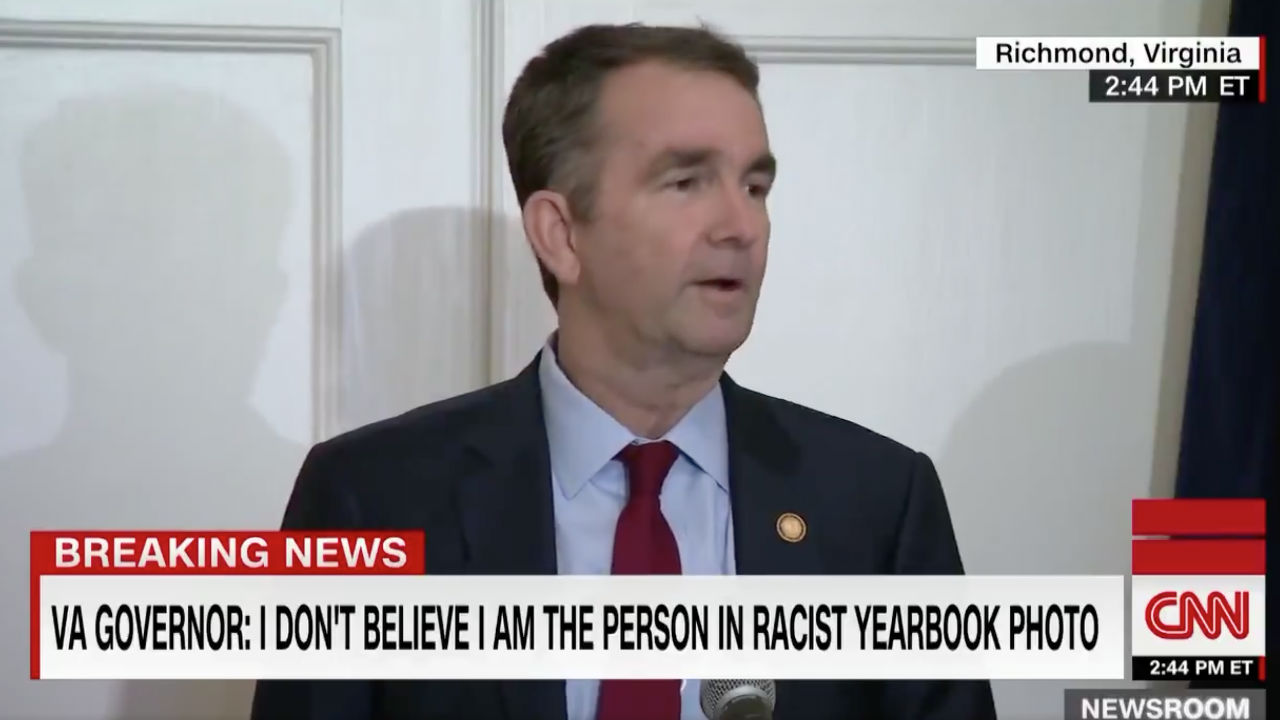 Virginia Governor Ralph Northam held a press conference on Saturday to declare that he did not think he was in the racist photo unearthed from his old yearbook, and that he was not planning to resign. He added that he wore blackface once to dress up like Michael Jackson at a dance party in San Antonio.

The surreal press conference was packed with twists: Northam provided a wild non-explanation for how the photo ended up on his page. He confessed to “darkening” his face for the Texas dance contest. He gave a half-assed explanation of why his yearbook nickname was “Coonman.” Later, when asked about the dance contest, he said he won because he learned how to moonwalk. He then made a joke about how hard it is to remove shoe polish from his face — but denied that qualified as blackface.

The presser — which you can watch here — naturally sent Twitter into a tailspin. Check out the running commentary of his train wreck here:

This Northam presser is surreal

Wait, so Northam is *admitting* that he did use blackface at some point but that it’s not him in the photo?!

Northam now appears to be trying to get ahead of other damaging stories, says he once “darkened his face” as Michael Jackson for Halloween.

Wait—he is telling us he put on blackface in another instance, a Michael Jackson dance contest, to convince us he didn’t do it in the instance pictured in the yearbook??

who among us has not participated in a San Antonio dance contest?

Wtf is going on

Northam claims he did wear blackface to be in a Michael Jackson costume.. which he claims caused his confusion that the picture in the yearbook was him.

This is like watching a trainwreck in slow motion.

Seems like to believe Northam didn’t think it was him “then or now” we would have to believe that he thought THE MOST OBVIOUSLY RELEVANT DETAIL was a secondary point to be brought up later?

Who had “I didn’t do this racist thing but I did another you might find out about” in the pool?

If you had “darkened my face to participate in a Michael Jackson dance competition” on your Northam speech bingo card, congratulations.

Well, it’s an argument. He doesn’t think that picture was of him in blackface because he vividly remembers the other time he allegedly wore blackface. pic.twitter.com/qpBwfj1dFf

This is one of the stranger press conferences I’ve ever seen.

If Northam’s relationship with LG Justin Fairfax were as strong as he makes it out to be, Fairfax would be standing with him at this press conference

Ralph Northam talks about his youthful adventures in blackface the way Grandpa Simpson reminisces about wearing an onion on his belt.

Northam says he won the contest in which he dressed up like Michael Jackson for a skit.

And he jokes about how it’s hard to get shoe polish of your face.

Northam does a riff on how he put blackface on in San Antonio and that he won the dance competition because he could do the moonwalk. My goodness this is bad.

haha so funny lol get it it’s a blackface joke https://t.co/akz2fboiop

holy shit this is better than the super bowl

“I dressed up as — what’s his name, the singer?” Northam asks his wife. “Michael Jackson.” He continues to explain how he put shoe polish on his face.

How deep is Northam trying to dig this hole?

I’ll still take this over Maroon 5