Graham Rejects Charge Benghazi Is Politicized: ‘Tell That to the Family Members’
VIDEO

Graham Rejects Charge Benghazi Is Politicized: ‘Tell That to the Family Members’ 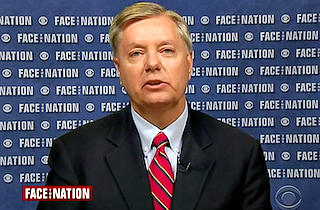 On Face the Nation Sunday morning, host Bob Schieffer asked Senator Lindsey Graham (R-SC), one of the driving forces behind the continued attention to the Benghazi story, to respond to accusations that he and the House GOP is using congressional investigations into the incident for their own political gain.

“I would say to anybody who believes that this is just about politics: go tell that to the family members,” Graham replied.

RELATED: Ingraham Battles Plouffe, Jones Over Benghazi ‘Politicization’: ‘You Guys Are Masters at This’

“Go explain to the family members how it’s okay for the white house to withhold information from the congress and the american people, and thank god for independent judiciary. Go tell the family members that it’s okay for Susan Rice to get on national TV five days after the attack and claim that the facility where their people died, where their loved ones died was strongly secured, when it was a death trap. Explain to the families that the video internet story that help the president’s re-election was so far from the truth it makes you mad.