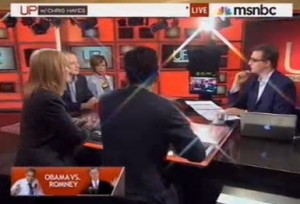 Girls creator and star Lena Dunham‘s voting virginity ad caused a ridiculous freak-out on the right, with equal parts prudish fanning and triumphant over-reading of its significance fueled by the prudish standard that makes people think this ad is edgy, and hence, desperate. Surely, the hepcats at Up With Chris Hayes will put the whole thing in perspective, and in record time, no less. Let’s see how Up panelists Richard Kim of The Nation, The Guardian‘s Ana Marie Cox, The New Yorker‘s George Packer, and TheGrio.com‘s Sophia Nelson handled it:

Sorry, that was the wrong video, but more concise and to the point than the two-plus segments the Up crew spent on this. George Packer found the ad familiarly “insulting to women,” Ana Marie Cox didn’t find it insulting, but it made her “uncomfortable” (come on, Ana Marie, your name is Cox!), Sophia Nelson agreed with Packer that the ad misfired by emphasizing “social issues,” and Richard Kim questioned the “hyper emotional response” to President Obama that they all feel this ad relies upon.

In fairness, host Chris Hayes tried to break up the tightly-puckered narrative by pointing out, repeatedly, that the ad is actually awash in substance (not that substance), but even he posed the substantive points in the ad as peripheral, and introduced the second(!) segment on the ad with the premise that it is analogous to the “God, guns, and gays” political erogenous zones of the right.

“I actually thought the video was good and funny, cheeky, it’s not the biggest deal in the world,” Hayes said in that second segment. “What was interesting to me about the video is the decision to make it and put it out there, as opposed to the video itself.”

That’s a decent point that could have led to a short, productive discussion, but instead, continued a too-long conversation about the ad’s “appropriateness.” Hayes is right, there is a measure of “edge” to the ad, but not one that merited the ensuing conservative freakout, the exaggerated political significance given to it, or the poor over-analysis of his panel.

First of all, it’s not as though Lena filmed the ad at a “specialty” piercing shop while swinging from a furry trapeze in a leotard of melted wax. It wasn’t that fricking edgy (unless your idea of hardcore is Ronald Reagan), so it’s not some monumental act of desperation, nor is it some sociopolitical milestone. It is, as Hayes and Lawrence O’Donnell each noted, an appeal to a portion of the President’s base, but a very natural one.

As a matter of figgity-fact, the Lea Dunham ad is chock-full of substantive policy issues like health care (which, trust me, is an economic issue), national security, pay equity, and civil rights, cleverly wrapped in a package that cannily threads the needle between substantive Trojan horse and canny satire. The setup to the ad uses virginity to draw the viewer in, to create the expectation of an emotional appeal, only to subvert that expectation by discussing policies. The message of the ad isn’t that voting is like sex, it’s that voting is more important than sex. Dunham executes the premise so well that it works both as mockery of shallow perceptions about women, and as a challenge to the shallowness itself. Hell, if his base weren’t so prone to gay panic and sex-fainting, Mitt Romney could use the technique himself. “What’s long and hard, and full of seamen? Three nuclear submarines, which we really, really need!”

At least Hayes and company eventually got around to the dirtiest joke of this campaign, the cruel one that has placed the forcible delivery of rape babies on the ballot, a heartbeat away from the presidency, at most. Maybe we can all lighten the f**k up on Lena Dunham one time.

Here’s the clip, from Up with Chris Hayes: